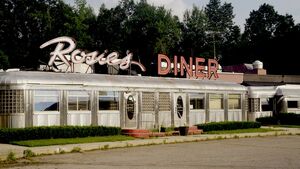 Rosie's Diner, currently located in Rockford, Michigan and dubbed "the most iconic diner in America" was featured in the 12th episode of the first Season of Diners, Drive-Ins, and Dives, American Cookin' on July 30, 2007.

The dining car originally opened during the 1940s in Little Ferry, New Jersey, as the Silver Dollar Diner. After multiple TV commercials were filmed in the diner for Bounty paper towels with fictional character Rosie the Waitress, the diner was renamed Rosie's.

After being offered to the Smithsonian Institution, the restaurant was sold in the 1990s to Michigan artist Jerry Berta, who had the building moved to its current location next to another diner. A third diner was later moved to the site from Fulton, New York. A series of replicas were built as part of a chain of restaurants in the Denver, Colorado area.

The diner was located on U.S. Route 46 when it first opened in 1946. Rosie's was owned by Ralph Corrado, Jr. and his father before him. Corrado renamed the restaurant after the waitress character from the commercials in 1970.

Two other commercials were previously filmed in the building, one for Sanka and another for Pepsi in the earlier days of the restaurant. However, the series of TV commercials that made the diner famous were for Bounty paper towels. They were filmed at the diner during the 1970s. Clumsy patrons would knock over beverages, and Rosie the Waitress, played by Nancy Walker, would clean up the mess using Bounty paper towels, pronouncing the product the "quicker picker-upper". Two decades after the first commercials were filmed, Walker was still cleaning up after her television customers, but on a studio instead of in the diner. Other companies like Ethan Allen Furniture and Sony used the New Jersey diner location for their advertisements. After 45 years and countless commercials in Little Ferry, Carrado placed the restaurant for sale.

Carrado sold the land under the diner to the auto glass repair shop next door. The business did not want the diner, leaving Carrado to sell the building. His offer to place "the most famous diner in America" in the Smithsonian Institution was rejected. Jerry Berta is an artist that produces ceramic replicas of classic diners, with the original Rosie's as one of his inspirations. He owned one diner, a 1947 Jerry O’Mahoney Dining Car, located on the site in Michigan when he found out that the New Jersey diner was for sale. Berta bought Rosie's and moved it to Michigan at its current location. The purchase price at the time was $10,000 for the building.

Work crews sawed the diner in half the week after it closed in 1990 in New Jersey to load it on flatbed trucks for the move to Michigan. The restaurant opened in its new location on July 5, 1991.

The current owner, Jonelle Woods purchased the diner in January 2006. Since the change of ownership, the former Garden of Eatin', a diner moved to the site from Fulton, New York in 1994, has been reopened as a sports bar by the new owners.

Retrieved from "https://diners-driveins-and-dives.fandom.com/wiki/Rosie%27s_Diner?oldid=5461"
Community content is available under CC-BY-SA unless otherwise noted.