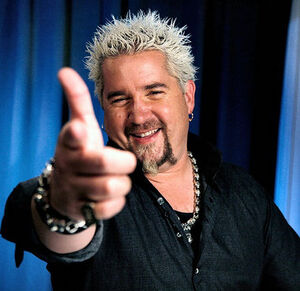 By mid-2010, the Food Network made Fieri the "face of the network." In 2010, the New York Times reported that Fieri brought an "element of rowdy, mass-market culture to American food television," and that his "prime-time shows attract more male viewers than any others on the network."

After winning the second season of The Next Food Network Star on April 23, 2006, Fieri was awarded a six-episode commitment for his own cooking show on Food Network. Guy's Big Bite premiered on June 25, 2006 and continues.

Diners, Drive-Ins, and Dives, his second series, premiered in April 2007 (a one-hour special aired in November 2006), with Fieri traveling the country visiting local eateries. The New York Times called the series "not a cooking show as much as a carefully engineered reality show." Ultimate Recipe Showdown, co-hosted with Marc Summers, debuted on February 17, 2008 and aired for three seasons. On September 14, 2008, Guy Off the Hook debuted on Food Network. This special studio audience show aired through the end of 2008, but the extra cost of staging an audience show did not result in a ratings bump and the concept was discontinued. For Thanksgiving 2008, Fieri hosted a one-hour special titled Guy's Family Feast. He used the "Guy Off the Hook" set for the special, which was broadcast live, on November 28, 2008. Fieri appeared on other Food Network programs such as Dinner: Impossible in 2007 and 2009, Paula's Party, Ace of Cakes, and The Best Thing I Ever Ate.

In December 2009, NBC named Fieri as the host of the game show Minute to Win It, which premiered in March 2010 and aired for two seasons. On May 13, 2012, NBC announced that the game show will not be renewed for a third season, citing high production costs and low ratings.

Retrieved from "https://diners-driveins-and-dives.fandom.com/wiki/Guy_Fieri?oldid=5750"
Community content is available under CC-BY-SA unless otherwise noted.